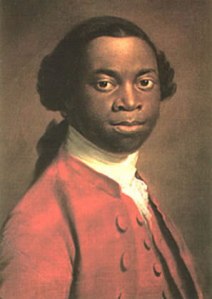 Even though 12 Years a Slave portrayed the pain and struggles of Solomon Northup, there is another story which predates Northups which in some ways is even more remarkable.
Coming from Igboland, Nigeria, the young Equiano was first taken to Barbados as a slave in 1754, shipped to Virginia, and was fortunate enough to purchase his own freedom in 1766. After travelling and remarkably learning the French horn, he settled in London and wrote his autobiography, The Interesting Narrative of the Life of Olaudah Equiano (1789) which depicted his experiences as a slave, was instrumental in the British Slave Trade Act of 1807. If this rags to riches story wasn’t enough, he married an English woman in 1792, and had two children. One can only imagine what life was like for two mixed race girls growing up in late 1700’s London. He also helped to select slaves in South America for Dr. Charles Irving, and managed them as they worked on sugarcane plantations. He became one of the leading abolitionists of his day, lecturing and touring with his book in the 1780’s, and was appointed to help resettle some of Londons free Black people in Freetown, present day Sierra Leone.

Here’s a link to his epic story:

London based Musician and Author